In March of 2021, The Roman Congregation for the Doctrine of Faith issued a statement banning any form of church blessing for same-sex unions. This followed...

...Pope Francis' earlier statements that LGBT+ relationships could be holy, giving rise to the hope that Rome would, at long last, give some recognition to committed expressions of love among those in the LGBTQIA+ community. It is clear now, however, that Rome obstinately refuses to accept the example of her founder, Our Lord Jesus Christ, who risked calumny, ridicule, and death for the company He kept and for his radical love of others who were expelled from the Temple.

In response to the Declaration of the Congregation for the Doctrine of Faith, the Bishops of the AAOCC issued a pastoral response to those who experienced the anguish such a blow dealt to any hope they held that Rome would give them a place at the altar. That statement is contained below.

After reading the statement, we hope all LGBTQIA+ Catholics will join with us in standing as a living prophetic protest against Rome's refusal to convert from their Pharisaic ways and accept the charism of embrace that Our Savior gave to His apostolic church. Sign up for our email list so you can receive updates on our ministries. 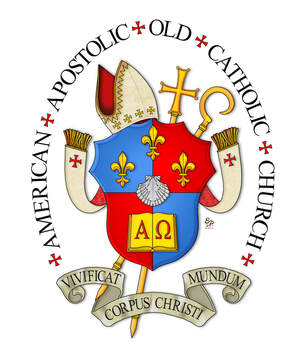 AMOR DIVINUM DONUM
The AAOCC Bishops’ Pastoral Response to the Roman
Congregation for the Doctrine of Faith Ruling Banning the Blessing of Same-Sex Unions.
To all of the faithful in Christ Jesus,
Grace to you and peace from God Our Faith and the Lord Jesus Christ!

In light of the recent ruling by the Roman Congregation for the Doctrine of the Faith denying ecclesiastical blessing to same-sex couples, the leadership of the American Apostolic Old Catholic Church feels it is our Christian duty to speak up.
​
As a Church, to create and sustain spaces of inclusion and affirmation for God’s LGBTQ+ children is part of our foundational mandate. We are honored to count them among our clergy and our faithful, and we are grateful to see first-hand the many ways in which God blesses them every day. Their lives of faith bear constant witness to their love for God and the Gospel, carried forward even at great personal expense. In the face of so many signs of grace, we can only acknowledge what is an obvious fact: God loves these children of His, and He has given them their gender identities and sexual orientations as a particular gift, a gift that enriches their lives and illuminates our common journey. The Church and the world would be poorer without them, without their loves, without the wonderful expression of their true selves.

For this reason, we deeply regret that the Holy See of Rome, whose primacy of honor we recognize, has missed this opportunity to convert as an institution and make amends. We regret that some prejudices of the past have been elevated to doctrine and transformed into an immovable block of stone. Sadly, this prevents the Roman Curia from seeing this reality of holiness and grace that is so obvious to us. The Roman Congregation has said that it is not possible to bless same-sex couples, because ‘God cannot bless sin.’  We agree that God cannot ‘bless sin’; however, we reject the label of ‘sin’ for same-sex unions. In fact, the particular love that two of the faithful profess to each other, regardless of their gender identity, is not only not sinful, but a God-given gift. Moreover, it can become that vocation to holiness that we call marriage.

We sincerely regret this new refusal to see the Spirit’s movement in the human heart, which adds to so many official acts of discrimination and exclusion accumulated in recent years, and which causes deep pain to so many faithful Catholics who hope for the day when the Holy See will open itself to the voice of that same Spirit, opening its arms to all people, as God the Father has never failed to do. We especially regret the grief and fear that this ruling may cause to so many LGBTQ+ youth, who are growing up in anguish, afraid of recognizing and embracing the precious gift of their identity. We suffer with them in the harm this statement has, and will, cause. To them we wish to say, with all our strength and without any hesitation, that God loves them as they are: God loves them when they are in love, God loves their love stories, God loves them exactly as they are.

We wish to congratulate those bishops, priests, and communities within the Roman Church who have expressed their disagreement and have decided to rebel prophetically, in the name of Christ and for the good of their siblings. We wholeheartedly applaud their courage.

Likewise, to all Christian communities—Catholic, Orthodox, Anglican, and Protestant alike—that are, like ours, authentically inclusive and affirmative, we earnestly implore them to raise their voices, to cry out at the top of their lungs, to light a beacon in the dark and let themselves be seen. For there are many—too many—who believe that they are alone, that they have no home. Do not be afraid and do not hesitate to cry aloud to heaven, for this is exactly what Christ expects of you.